Ferg was turning the big 3-Oh and I had originally started to organise an autumnal BBQ and garden party, with him agreeing to it and everything.  But as the date loomed, as I think it does when a milestone event creeps up on us, slowly at first but then rapid as f*ck, and he started acting ‘itchy’.  I know this look well because it happens to me frequently, so we started to talk about what he would want to do to mark the occasion (my words not his – I am a firm believer in marking things with other things, which is nothing at all like organised fun…OK?!) 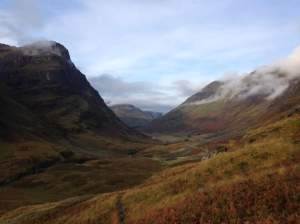 The proposal to climb Anoch Eough Ridge was cast out there, Ferg was really enthusiastic about it and I had to say Yes because it was his birthday, kicking off the King’s planning process.  We headed up the night before and something ultra awesome happened.  It’s rutting season in Scotland from end of September to November, so when we reached the long straight of Rannoch Moor lots of little dancing beads of light started appearing.  We slowed and peered out to see hundreds of deer staring back at us, watching us pass with an eerie calm, making the rest of the drive quite tense and slow.  When we eventually reached the lay-by near the Claichaig Inn, sleep came very easily. 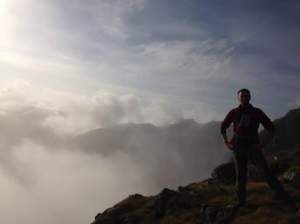 Waking up in the back of a van is always a bit disorientating (just remember, no sudden movements and definitely no sitting up!) but the best bit is sliding open the door onto a stunning view.  Glencoe is as picturesque as you can get and a perfect example of Scottish Landscape, with the Ridge to the left and Devil’s pass to the right, it was not hard to get out of bed that day! We dressed, ate and were on our merry way, along the road, which isn’t ideal but beats having to walk back for the van after completing the Ridge.  As soon as we gained even a little bit of height the scenery started to grow around us, impressing and delighting with every step.  As we continued on we started to head further and further into wet mist, which a few people had turned back from, but we’re both glad we stuck to our guns.  Ferg knew the path up and we had the provisions we needed to keep on truckin’, also we both hate turning back when we’ve started on something! 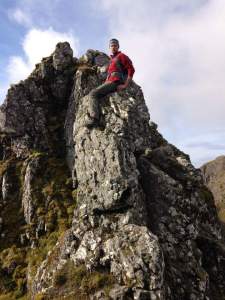 Suddenly we broke through the mist and were on top of the clouds, looking down like some sort of Viking sky warrior’s, keeping watch over our kingdom!  In all seriousness though there is no better feeling than being up so high and knowing your determination and body is the reason you got up there and if we thought the views before were stunning this is another level of beauty.   We had to climb up a few rocky parts and negotiate our way down slabs of stone but we did so with care and excitement. 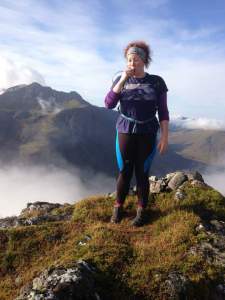 This sense of wonderment mingled with fear stayed with us the remainder of the walk, with the fear part taking over towards the end when we took a bit of a wrong turn and ended up scaling a ledge part of the way down.  I learned a valuable lesson in correct footwear that day too, having fallen on my bum on the descent too many times to keep count, picking up a rash on my left butt cheek and back of thigh that stayed with me for 2 weeks!  Today I have a new pair of boots, which feel like a badge I’ve earned, for making the change and saying Yes more often than No. 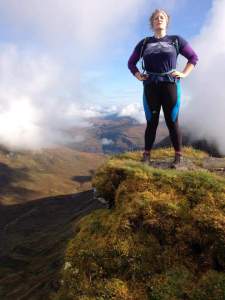 I can do anything!

The whole walk including descent too near enough 7 hours, so pack accordingly and I’d recommend this walk to anyone as the pay off is simply amazing.